Skip to content
HIKING IN THE KOGELBERG NATURE RESERVE

The incredibly beautiful and rugged Kogelberg Nature Reserve was declared a UNESCO World Heritage site in the early nineties as the Cape fynbos is one of the wonders of the world, and it needed protecting. By far the smallest of the 6 Plant Kingdoms in the world, but with the second greatest diversity the Cape Floral kingdom harbours 9000 different species in 90 0000 square kilometers, 6190 of which are exclusive to the Cape Flora. To put this into perspective the British Isles, which is three and a half times larger, has just 1500 species, only 20 of which are endemic.

It was the early Dutch settlers who described the hardy plants of the Cape as fijnbosch, meaning fine leafed bushes. Today the term fynbos describes all the diverse types of plants, proteas, ericas, restios grasses and geophytes (which include gladioli, lilies and the orchids) that have evolved to survive on the nutrient poor soils, high winds and dry summers that characterize the southern tip of Africa. Although apparently lush and green, fynbos is quick to burn, and fires are therefore restricted to designated safe sites.

The Kogelberg Biosphere Reserve, the first UNESCO declared Biosphere Reserve in Southern Africa, spans some 100 000 hectares of natural vegetation, towns and agricultural lands in which there are over 1600 species of fynbos, 150 of which are endemic, for you to discover, touch, smell, wonder at and photograph.

Please do not pick!!! The reserve lies within the southern stretch of the Hottentots Holland mountain range and has remained isolated and remarkably unspoilt. Its high mountain peaks, steep kloofs, valleys and several tributaries of the pristine Palmiet River create a sense of remote wilderness.

The Kogelberg area has evidence of early stone age hunters, who probably lived off game, shellfish and edible plants. Khoi people inhabited the area from about 100 000 years ago until modern times, and their middens and burial sites can be found along the coast. Because the area was too rugged for agriculture in the eighteenth century, it was left practically untouched over the years. The incredible beauty of the area as well as the plentiful game was however described by early explorers.

There are 3 different but associated zones in a biosphere reserve:

Transition area: Area of intense utilization and transformation towns: a zone of co-operation where awareness is fostered.

Animals in the Kogelberg Reserve
The Kogelberg does not have many large animals. There are a few leopards, the Cape clawless otter may be seen in or near water, small antelope include klipspringers and grysbok, and baboons, dassies and hares are fairly common. Peregrine falcons, black eagles and fish eagles hunt and nest in and around the reserve. The endangered micro-frog and an endemic fresh water crab are also found in the area.

Chacma Baboons
Baboons living in the Biosphere area claim right of way when crossing roads. Drive carefully when encountering a troop. The alpha male can be recognized by his dark mane on his neck and shoulders as well as by his sheer size. These wild animals are best left alone â€“ never feed, approach or excite the baboons, just let them continue on their merry way. The residents of Pringle Bay and Rooi Els communities have learned to live in accord with the baboons, developing warning systems to alert home owners, shop keepers and restaurateurs to the imminent visit of a troop.

Hiking and Canoeing in the Kogelberg Biosphere
More than anything and, some would say, anywhere else, Kogelberg is a range for the hiker. Kogelberg is undoubtedly Cape Nature Conservation’s most beautiful Reserve. This is largely due to the fact that it occupies an area that has been least interfered with by people in the past. Today it is considered the heart of the Cape Floral Kingdom because of the exceptional quality of its fynbos. 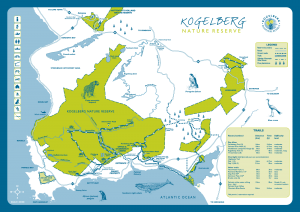 Palmiet River Walk (18km; 6 – 7 hours): This trail hugs the river, and then takes you deep into the Reserve to the Stokoe bridge and back again. It has been graded easy. Groups are limited to 10 people and you should ensure that you begin before noon.

Kogelberg Trail (23km; 8 – 9 hours): This circular route takes you through the heart of the reserve. The trail is graded moderate to long.. Start before 10am. Groups are limited to 12 people.

Oudebosch to Leopard’s Gorge (6km; 3 -4 hours): This is a one way only route. You will need a vehicle to get you to Oudebosch and another to collect you at the end, at the Harold Porter Botanical Garden. The grade is moderate. Begin before noon, as Harold Porter closes at 6pm.

Canoe Trail: This ever popular trail covers 15km of the Palmiet River and with rests and section repeats is an all day affair. It is only open in winter (June 1st to September 30th) when the river is likely to be at its fullest, and when only competent canoeists (Grade 3) should tackle it. Enquire at the Oudebosch office about guided tubing and rafting on the river.

Getting there: The Reserve is a 90 minute drive up the east coast from Cape Town. Take the N2 towards Sir Lowry’s Pass. Turn right on to the R44 through Gordon’s Bay. Continue on this scenic coastal route, past Rooiels, Pringle Bay and Betty’s Bay. Just before you cross the bridge over the Palmiet River estuary and about 3 km from Kleinmond, take the sign-posted dirt road to the left. The office at Oudebosch is 3 km down the road. Enquiries and bookings:

Moonstruck on Pringle Bay is a contemporary beach house retreat overlooking Pringle Bay main beach, a 90 minutes drive from Cape Town on the Cape Whale Coast Route. Moonstruck offers private luxury accommodation with beach and mountain views. The beach is a 3 minutes stroll accessed via a greenbelt in front of the property. Operating on a bed and breakfast (B&B) basis with good restaurants within easy strolling distance.